To share your memory on the wall of Frances Tracey, sign in using one of the following options:

Frances was a lifelong Watervliet resident and attended the Watervliet Schools. She worked for J. Debeers in Albany as a baseball stitcher for more than 29 years until her retirement in 1986. She would then go on to work as a daycare assistant at the Seton Center for several years. Frances was a member of the Parent-Teacher Association at St. Anthony’s School in Troy where her sons attended and she was also a parishioner of the former Our Lady of Mt. Carmel in Watervliet. Family was the most important thing in this world to Frances, nothing made her happier than being surrounded by her family and serving her famous spaghetti and meatball dinners.

Frances was the last surviving sibling of twelve and was predeceased by her brothers; Dan DeCrescenzo, Sam DeCrescenzo, Pat DeCrescenzo, Lou DeCrescenzo, Tony DeCrescenzo and Dominick DeCrescenzo; her sisters, Ann Saccocio, Virginia Berlino, Rose Gregnano, Pauline Lippitt and Mary Keough.
The family would like to extend their sincere appreciation and gratitude to the entire staff of the A1 and B1 units at Van Rensselaer Manor for the wonderful care and compassion shown to their mother throughout her stay.

Those wishing to remember Frances in a special way can make memorial contributions in her name to The Galactosemia Foundation. Click here to donate.

A Mass of Christian Burial will be celebrated for Frances on Thursday April 22nd at 9:30 am at St. Anthony of Padua Church, 28 State St, in Troy. Burial will follow at St. Patrick’s Cemetery in Watervliet. Friends and relatives are invited and may call on Wednesday April 21st from 4:00 – 7:00 pm at the Parker Bros. Memorial Funeral Home, 2013 Broadway in Watervliet.
Read Less

To send flowers to the family or plant a tree in memory of Frances G. Tracey, please visit our Heartfelt Sympathies Store.

Receive notifications about information and event scheduling for Frances

We encourage you to share your most beloved memories of Frances here, so that the family and other loved ones can always see it. You can upload cherished photographs, or share your favorite stories, and can even comment on those shared by others.

Maureen, John and Kristin, Scott & Melissa John, and other have sent flowers to the family of Frances G. Tracey.
Show you care by sending flowers

Medium Dish Garden was purchased for the family of Frances Tracey. Send Flowers 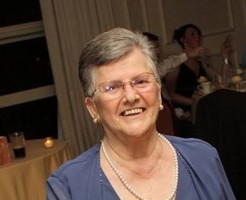